Week 1 of our build is over. It was less of a build and more of quite the opposite. We had our roof taken off and preparation work done downstairs for demolishing walls.

You will hear the ‘dust warnings’ from everyone when you start a build but nothing can prepare you for the noise, the shaking walls and the dust that you get during a demolish phase of your build. One friend even told me we were mad for staying in the house during the build as he’d done the same and it was awful!

Our house was built in 1923 (roughly) and the roof was the original construction with very large railway sleeper-type wooden supports holding up both sides, there was nothing in the middle, apparently that was the traditional way of doing it. But it needs a lot of long, thick slabs of wood and so it took three days to remove all the tiles, the felt (which was full of holes!) and the wood with the large support planks causing damage to the downstairs ceilings as they were moved about to the edge of the roof for putting on the driveway. 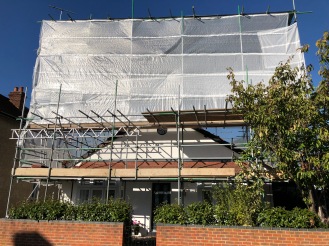 The noise, vibrations and dust is incredible. Some electrical wires were accidentally severed so we had a couple of lighting circuits that went off and some bulbs falling out of lights (at the time of writing this post, the mother in law had two photos fall of her wall randomly this morning).

We went through skips like water, with 2 or 3 being delivered and collected during certain days. This brings me onto a key ‘thing to consider’ if you’re doing a build and that’s access and space for deliveries, waste and skips. We have a driveway roughly 3.5m wide and very long but it quickly became full with waste (and a portaloo!). Whilst it was plenty wide enough for a skip, the road out the front is slightly narrower than the rest of the street and we upset our neighbours by blocking access or asking for cars to be moved so the skip lorry driver could swing in to swap skips. Please let your neighbours know what you’re doing beforehand and ensure they can approach you if there are any issues during the build – and not just the ones next door but up to several houses away. 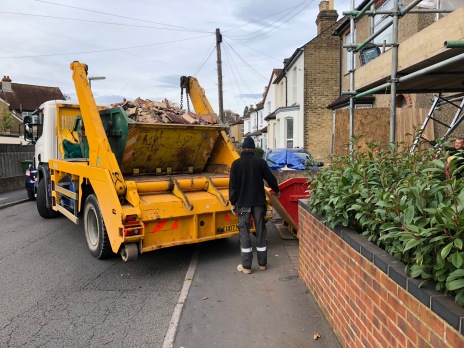 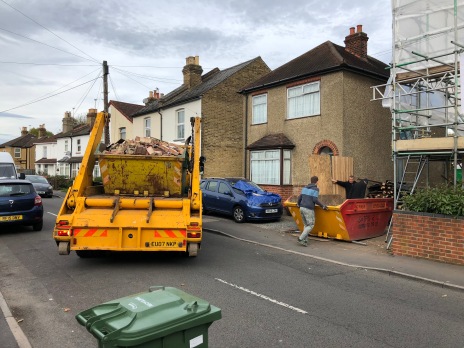 Our waste piling up!

The skip lorry did block the road for 5-10 minutes at a time and traffic did build. We have deliveries of timber and blocks arriving soon and that will require a 30 minute road block as they are craned in from the lorry so supports need to go out the side doubling the lorry’s width.

But we are left with an open attic and can now see the space we will have. It’s interesting that once you get up there and think about how many rooms are going in (3 bedrooms, 2 bathrooms, a study and airing cupboard) you don’t think they are going to be very big but it’s all perspective. Once I realised the footprint of the rooms below I could see that actually it will be great bedroom space.

Downstairs, we prepared the back rooms for wall demolition as we are opening up the dining room, taking out its chimney breast, plus breaking the wall between kitchen and living room to create a fully open kitchen/lounge/diner. This meant lots of ‘ackros’ to prop up the ceiling and a solution that enabled us to try and keep our living room furniture and telly dust free. Our builder had an idea to enclose that space in a wooden-framed PVC sheet curtain. It was a godsend I have to say – we still had the use of our living room for telly in the evening and it made a little haven from the demolition work. We’ll have to see how good it is at keeping the dust away when they start to bring the walls down. This prep also means my wife and I are now without a bedroom, so we have put our mattress in our boy’s bedroom… it’s very cosy!

The next steps are clearing the attic insulation and rejigging the pipes and electrics to allow us to lay the new floor joists. Oh, and knock down all the walls and a chimney downstairs!

Please check out the rest of our Big Build blog here.